Having worked with network monitoring tools for almost ten years, we like to think we know a thing or two about this technology and the solutions on offer. Yet, with so many new features, such as cloud monitoring, network packet analysis and application metrics, now available with these tools, it can be dizzying comparing them.

To help you decide which solution works for you and your network, we have created a list of what we think are the top five network monitoring tools, with a small review of each.

WhatsUp Gold is a network monitoring tool brand which has been a part of every network administrators career at some point. Its highly recognisable name is a result of its widespread use,, with a reported user base over tens of thousands of some of the world's most well-known companies - small, medium and large.

Both its widespread use and age are testaments to the strength and quality of the WhatsUp Gold solution offering, with features such as automatic network map generation, Azure & AWS monitoring, SNMP, WMI and customisable dashboards, all as standard. One major strength of Ipswitch WhatsUp Gold is its very short setup times, with basic deployments taking less than an hour. The solution is highly configurable, keeping network administrators busy with small tweaks here and there for weeks to come, should it be necessary.

This level of depth, sometimes referred to as a rabbit hole is great for customisation, but can also be a disadvantage in its complexity.

If you would like to learn more about WhatsUp Gold, take a look at our dedicated solution page here.

Often hot on the tail of Ipswitch WhatsUp Gold, is PRTG. German engineering for the network monitoring marketplace.

PRTG has all the features you would expect from a network monitoring tool - automated discovery of new devices, health monitoring and log collection. All housed inside of its web-based administration console.

Known for its analytical view of device health, using colour-coded gauges and its donut map, PRTG is going to be very popular with those with a penchant for analytics. If there is one thing Germans are stereotypically famous for, it is their love of details. PRTG does nothing to dispel this myth. However, there are a few things which mean that we cannot put PRTG at the top of our list.

We feel this is something which Ipswitch WhatsUp Gold has the edge with, as they offer a device license which supports an unlimited number of monitors per device.

Our third-pick is a close contender for second place. SolarWinds Network Performance Monitor, usually known as NMP is one of the three big-boys of the network monitoring space.

Scalable, visually appealing and featuring everything that you would expect from a top-tier network monitoring tool. SolarWinds NPM is a great pick, especially if you are already using one of the other solutions in the SolarWind portfolio. So then why not first place?

Despite it being a serious contender, we think that SolarWinds have taken their finger off of the pulse of what is around the corner for the network monitoring market. In particular, we are disappointed that there is very little for cloud system monitoring.

Where Ipswitch WhatsUp Gold and Paessler PRTG have capabilities to monitoring Azure, AWS and cloud-based software like Office 365. SolarWinds seems to only focus on what is inside of the firewall.

Cacti is the only network monitoring tool in our list which is free to download and use under an open source license. There are plugins and other add-ons which can be applied at a cost.

Much like PRTG, Cacti is an analysts playground. It is much less refined than some of the other tools when it comes to the graphical user interface or wizard-driven features. Where it prides itself is in its high level of customisation, all the way down to being able to create connectors and dashboards at code level.

We have yet to find a user of Cacti who is truly happy with what is available out-of-the-box. In-fact we often find that people are initially led to it due to its free price-tag. But then determine that the time and expertise required to customise the solution to their needs, prohibitive and hard to determine.

For those who have the time and the inclination, Cacti is a great tool. However, long-term use is not something we often witness.

Last on our lists is another well-known name in the network administration community, ManageEngine.

Sometimes seen as a Jack of all trades, ManageEngine have done a solid job with OpsManager. It is visually impressive, connects to a lot of network devices and can generate highly readable reports.

OpsManager is a great entry level commercial network management tool - often chosen because of its low licensing costs. It is in some cases 6 - 8 times cheaper than the top three solutions.

However, you get what you pay for. The level of depth is not there and the customisation is relatively limited. If it is a basic solution, OpsManager is for you. If you want something which you can shape to your needs, you will need to look higher in the list.

Are you interested in a network monitoring solution and would like to see more of what can be achieved with WhatsUp Gold? You can book a call with one of our solution specialists here. 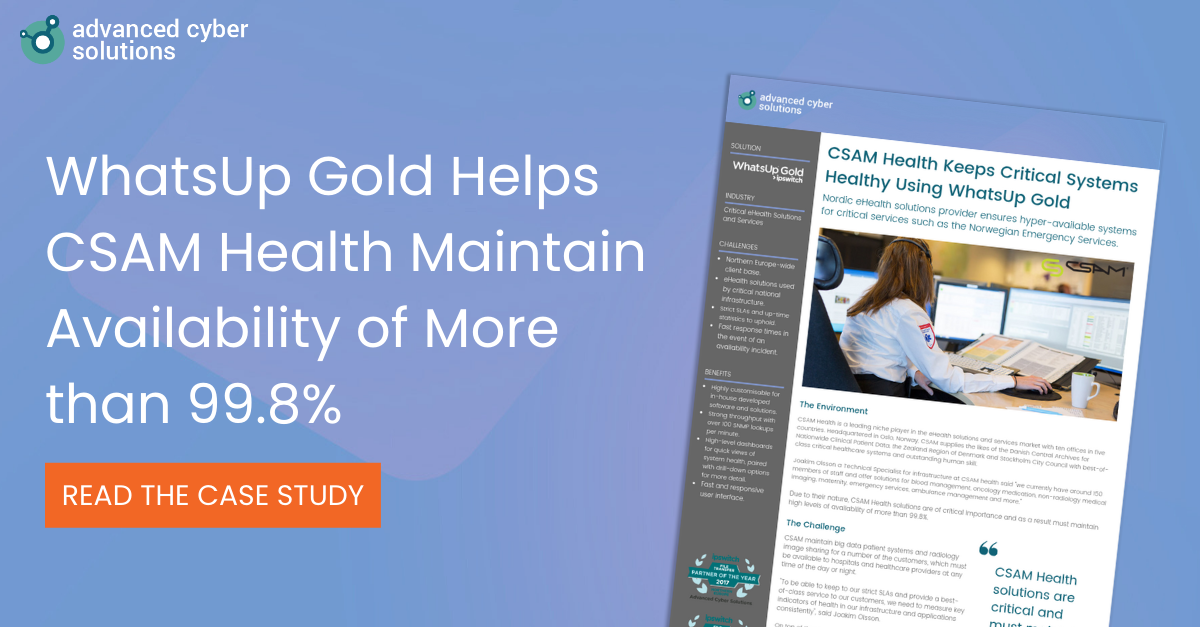